The Twin County Junior Wrestling League consists of teams which are located throughout the Northern New Jersey counties of Bergen, Hudson, Passaic and Morris.

The teams within our league follow a seven week schedule that commences the first weekend in January and continues into mid-February. At the end of the season 5 District tournaments are held and the top 2 finishers in each weight class move on to the Regional tournament which is hosted by Hackensack.  We also host a novice tournament each year which is open to all the programs within the TCJWL.

The structure for the regular season Saturday matches might best be described as a "structured scrimmage." A typical Saturday match will consist of 3 to 4 teams meeting at one site and having nearly each wrestler compete during the morning's competition. Competitors are matched according to a set of four criteria: AGE, WEIGHT, YEARS of EXPERIENCE and SKILL LEVEL. This format ensures that, to the best of everyone's ability, each wrestler is afforded the opportunity to compete at a level that will allow for that individual to learn this great sport. 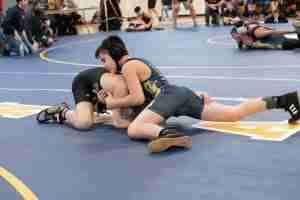